Skip to content
Loading...
Latest news
Top tips for buying a car seat at Mama Magic (or on Black Friday!)
Breaking down the cost of car seats
Swedish child safety heading to SA
So what do you look for when selecting an infant seat?
Did you know? The car seat edition
ArticlesPersonal StoriesThe BasicsTop Tips

Car seats haven’t been a topic for debate in our family. I was adamant about getting a fantastic car seat for Harley when she was an infant. When it was time for her to get something bigger, I was lucky enough to get a Volvo Britax seat for her that lets her rear face until she is 4-6 years old. Harley has never been in a car without a car seat. It simply wasn’t an option. If we had to go travelling somewhere, she was in her seat – if we didn’t have a car seat, she simply couldn’t go.

Moms often feel isolated with kids, like they can’t leave the house… Let alone travelling to cool places, with their tiny person. I always encourage parents to just keep living their lives, with little ones along for the ride. But sometimes this is an easier task than other times. It’s always easiest when we drive in our car. The car seat is installed, and it is quick and easy to just pop Harley in and out. Things get trickier when traveling, but it’s still totally doable.

Local trips are usually easy enough in your own car, but that’s not always possible. Months back, we took our car in for a service expecting it to be a morning at the shop. Instead, it was two whole days! That meant we had to be able to get around (and get Harley to school) without our usual car, or car seat. Yes, I was silly enough to leave the car seat in the car for our service. Pro tip: Don’t do that! Take your car seat out of the car if you bring it in for a service.

Unfortunately, that was also the morning that I learned that Uber in South Africa has REMOVED the car seat option. I even spoke with a couple Uber Van drivers who said they used to have car seats but had them removed because they weren’t allowed to offer that option anymore. As you can imagine, I was livid.

In the end, my mother-in-law drove me and Harley to her school using a spare car seat. I was very lucky that Harley is still so tiny and fit in the spare seat! Unfortunately, I’m not really sure of what other options there are for ad hoc travelling around your city, but there is room in the market for it so perhaps Uber or Taxify will step up and start offering it again.

Some of you might remember that Dean and I went with Harley for a fantastic holiday before we moved, heading to Cape Town for almost a week. It was a wonderful trip, establishing a ton of fantastic memories. It can be a bit daunting to figure out the car seat thing when getting on a plane, but actually airlines and rental car agencies make it as easy as possible.

When you fly, whether nationally or internationally, car seats are allocated as complementary excess baggage. This means that it’s totally free to bring your car seat (and pram). These can either be checked through at the normal baggage check section, or at the gangway if you prefer. I was a bit paranoid about this for our Cape Town trip – the car seat Harley normally uses costs more to replace than our entire flights to the Mother City. So instead, we opted to rent a car seat.

This was a surprisingly easy and enjoyable way to do things. When we picked up the rental car, they saw that we had also rented a car seat. They asked how much Harley weighed and gave us a seat to use that was size appropriate. I wasn’t 100% pleased as it was a forward-facing seat and I know it’s much safer for Harley to be rear facing. However, it’s still 100% safer for her to be in a forward-facing car seat than nothing at all.

Living in the US

Most recently, we have moved to the US, where car seats simply aren’t negotiable. It’s amazing to see how people actually obey this rule, strapping their kids into car seats. Even when we bought a new car, the car salesman said that of course we must put Harley in her car seat along for the test drive – how else could we be sure that our seat fits nicely in the new car?

Travel is a lot of fun, and something that’s honestly quite doable with a kid. Sure, it has its hurdles to overcome but it’s no excuse to let your kid be unsafe, or not to go in the first place. If you have a quality car seat and enjoy driving, you can road trip like we did to Knysna. Or you can fly and rent a seat if need be. The main thing is to just decide that car seats are not up for negotiation. I wouldn’t think of travelling without my phone and charger, passport, wallet… and a carseat for Harley. It’s just that integral to the basic things we all need.

Zoe is a rockstar geeky mom to a gorgeous little girl named Harley Wednesday, who is 3 years old. Zoe grew up as a gamer, bookworm and film nut in New York. Moving to the Netherlands and South Africa did nothing to change those things. Now she’s back in the States… Living in the desert of Arizona with her South African husband and their precocious little girl.

I spend my days writing words for money, whether as a freelance writer, a video game and tech journalist, or a geeky, empowered mom blogger. I examine day to day feelings and events with a bit of a different take on things. From child development ideas and ways to raise a genius, to how to find time for gaming and reading while negotiating with a toddler, I look at parenting through a unique lens. Plus, there’s all the usual stuff, like mom guilt, day to day frustrations and the worst question every mom is asked daily – what’s for dinner?

You can find out more about BornGeek here.

Our babies are our most precious cargo, and our most vulnerable. Anything can happen at any point on the road so use a carseat! 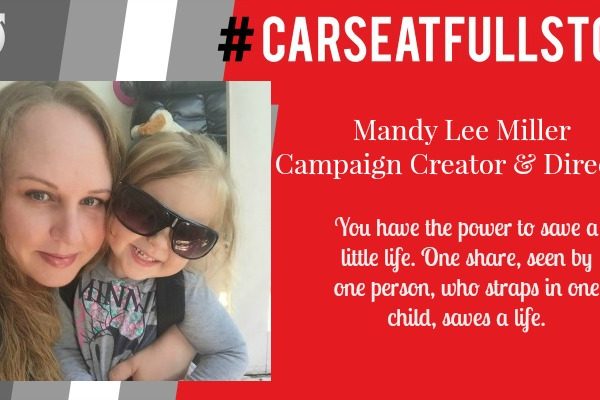